Q+A with the Campbell River Courtenay and District Labour Council 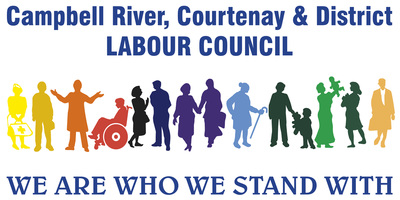 Please click on each question to read the answer.

I am not currently part of a Union, however I was president of my Student Union at University and successfully organized a 100% shutdown of classes to fight rising tuition fees resulting in an in person meeting with then Premier Mike Harcourt. I have worked in several union environments successfully as a practicum student (BC Ministry of Education, Parks Canada, Okanagan University College, IATSI) and worked on an ad campaign with the Telus Union in BC.

Have you been a candidate in a previous election and/or volunteered in an election campaign?

In 1991 (at age 17) I travelled to South Africa to support the Referendum to Abolish Apartheid.

In 1993 I ran for City Council in Salmon Arm, BC on a platform of affordable housing, sustainable development, the environment and youth activities.

While living in Victoria I supported Bea Holland who was elected to city council from 1997-2006.

I was elected to Courtenay city council in 2014 and ran on a platform to not evict residents of Maple Pool Campground as they would have ended up homeless.   I also supported the environment, affordable housing, youth representation, transparency, and better supports for those with mental health, addictions, trauma and brain injuries. As chair of the Water Committee I was successful in getting a unanimous vote to upgrade our water treatment as well as a $62.5 million grant from the Province and Feds. Most importantly I started a monthly meeting with K’omoks First Nation to discuss water, sewer and other major regional projects to put local reconciliation into action – meetings which still happen to this day.

I voted in favour of the Tree Retention Bylaw and created the motion for an Urban Forestry Strategy- both of which passed.  I moved the motion to create the Homelessness Service at the Comox Valley Regional District and collect taxes to support the Homelessness Coalition.  I supported increased transit and a rapid corridor which has resulted in increased transit usage.

I was elected Mayor of Courtenay in 2018 and saw the completion of two affordable housing projects – Braidwood and The Junction – which I had worked on while a city councillor.  I have focused on affordable housing as mayor, submitting several properties to BC Housing to be used in Co-Op housing projects – unfortunately they were all rejected, however Wachiay Friendship Centre was successful in their bid for Indigenous Seniors Housing.  Over my tenure as mayor we have also seen the largest expansion of apartments in decades to help satisfy the quantity of units needed, but more work still needs to be done on affordability. I have started monthly meetings between the City and K’omoks First Nation to look for opportunities to work together towards reconciliation.   I also created a leaders lunch between all the Mayors and Chair of the Comox Valley Regional District, K’omoks First Nation Chief and Base Commander so we can discuss common issues, look for opportunities to work together and build better relationships. I was also elected Co-chair if the Comox Valley Economic Recovery Task Force with Chief Rempel and Chair of the North Island Sunshine Coast Regional Advisory Committee (by all the mayors and chairs of the Region).  I feel I have been successful as mayor not by just leading, but by building consensus with a balanced approach that is often  ambitious. I must point out that although I feel I have been successful, it is because of other great elected folks in office, fantastic staff operationalizing policy and all those who came before me who have worked so hard for progress.

Why are you running for office? What would you hope to achieve in the position you’re running for?

I am passionate about our community and feel there is much more to be done for affordable housing, jobs, the environment and care for those with mental health, addictions, trauma and brain injuries. I would like to continue working with the Province to create affordable housing and to ensure proper complex care for those that require it. We need to continue creating safer streets for multimodal commuters navigating our ever increasing traffic. We need to create a modern community economic development plan that creates local, well paying environmentally friendly jobs. I believe we have a vibrant arts community but that it needs continued support to thrive and prosper.

What do you believe are the critical issues facing your community?

Affordable housing, jobs, the environment, as well as complex care for those with mental health, addictions, trauma and brain injuries.

How would you make local government more inclusive, open and responsive? How would you work to engage more citizens?

Since the last election I have created weekly meet the mayor appointments that anyone can book and have met with hundreds of people discussing a wide range of issues – and more importantly have resulted in real solutions. I respond as quickly as possible to enquiries and have empowered City Council to respond as well and support them meeting with constituents so we are able to meet with more people.

Our council has plans to have town hall meetings to get out and interact more, including the Employee Housing Symposium. However the Pandemic severely limited our ability to do so.

I personally try to meet with community leaders as much as possible and have actively participated in processes like our OCP update and downtown charrettes.

What steps will you take to work towards action on Truth and Reconciliation? What is the role of local government in the ongoing process of reconciliation?

As Chair of the Water Committee I started monthly meetings with K’omoks First Nation to discuss infrastructure projects affecting our region as well as opportunities for active reconciliation like creating signs at Seal Bay Park that include traditional Coast Salish language and names.

As Mayor I was proud to accept the position as Co-Chair of the Comox Valley Economic Recovery Task Force with K’omoks First Nation Chief Rempel.

At our monthly meetings with K’omoks First Nation we now ask to learn a new word or phrase that we can use such as “my name is”.
I have been involved in the kus-kus-sum project since the beginning and have been a strong supporter politically as well as professional through donations from my company and volunteering to help raise funds. I look forward to being able to volunteer as the restoration advances beyond the machinery.

In all that we do at the city we look for opportunities for reconciliation.

Do you think public infrastructure is better owned by the private or public sector? Describe your position on public private partnerships?

Public infrastructure should be owned by the public sector.

I believe removing the profit motive is ultimately better for public infrastructure. I think you can be fiscally responsible with much better safety, environmental and long term outcomes.

Are you aware of the Living Wage campaign, and is this something you would support if in an elected position? How would you do this?

Yes I am aware and support the living wage campaign. I believe the city has a living wage through CUPE negotiations for staff and our council has been working on a Social Procurement Policy that will be adopted in June that will address living wages, Indigenous contractors and other social benefits.

What is your position on a locally sourced / union made purchasing policy?

I am a huge supporter of buying locally.  I also support Sandra Hamilton and her push for a social Procurement Policy that can have criteria for local jobs, environment and other local benefits.

In a strike situation, would you support back-to-work legislation for municipal workers? Would you cross a picket line in order to carry out your duties?

I do not support back to work legislation unless it directly affects the health and safety of the community.  I would not cross a picket line.

What is your vision for future development in our community? How do you see creating family- supporting jobs while protecting the environment?

I have always Worked towards creating affordable housing and livable / walkable neighbourhoods.  As a serial entrepreneur and mentor for over 3 decades I have advocated for small businesses which already employ the vast majority of people in BC.  Local businesses are also more likely to be more concerned about the environment, employee health and wellness, and the community.   My work with Startup Canada focused on Bunnies rather than Unicorns.  The idea that small companies are more important to support than large billion dollar companies.

What do you think can be done to provide better access to affordable and social housing in our community?

Since first running for council in 1993 affordable housing has been a priority for me. Unfortunately it has been proven that the government’s lack of investment in new non market housing has diminished truly affordable housing while at the same time the real estate market has been left unregulated to a point where investors have created truly unaffordable housing prices. I have been part of every Habitat for Humanity housing project in the Comox Valley, and although it has been able to house many families over the past 16 years it cannot fix everything. The provincial and federal governments need to invest now to provide non market housing that is truly affordable. When I became mayor I called for an Employee Housing Symposium that brought together non profits, all levels of government and developers. Although several projects are the result of the symposium the real limitation has bee government investment- even rejecting projects where the city offered land for free. Given these challenges it is more important than ever to continue to fight and work together with all levels of government, non profits and developers to create affordable housing.

If elected, how would you support the inclusion of community members who are marginalized and/or members of equity seeking groups when making decisions?

Always working to create opportunities like town halls and community charrettes is important. Making sure to reach out to community members that are marginalized through direct contact and invitations to participate is critical. As Mayor I have had open appointments every week that people can book, have invited people to present to council and have supported MMIWG2S, environmental and social cause by showing up, volunteering and listening.

Why have you applied for endorsement from the Labour Council? How will you communicate issues to the Campbell River, Courtenay District Labour Council including timely notice on emerging issues? Please list issues you believe are important to Labour Council members.

I think it is important to support the Labour Council and for its members to know who supports it and for elected officials to show real tangible actions towards reconciliation with First Nations, protecting the environment, transparent governance, working to create affordable housing and local, environmentally friendly jobs while creating complex care for those with mental health, addictions, trauma and brain injuries.

I think it would be great to meet on a regular basis with the labour council to discuss issues and opportunities like we do with other leaders, SD71, and K’omoks First Nation.  If they were scheduled every couple months they could always be cancelled if there were no agenda items.  As there are several months left in this term let me know if you think this is useful before the election.