The 44th annual Comox Valley Child Development Association Telethon once again brought the community together to raise funds for kids.

By the end of Sunday night, the total stood at $94,489, though organizers expect a little more could come in.

Through the day, telethon hosts, entertainers and volunteers were busy adding to the totals inside the Sid Williams Theatre.

For Comox Valley Child Development Association (CVCDA) executive director Joanne Schroeder, this year brought some mixed feelings, as it marks the last telethon for her at her position.

“It’s kind of a bittersweet thing for sure,” she said.

However, she expects to be involved as a volunteer in the future, pointing out previous director Lorraine Aitken, who was nearby as a member of the team helping to put on the show.

Organizers expected the total this year to be a drop-off from last year’s total of more than $117,00 because there had been a major push on in 2018 to get funding for a new building for CVCDA’s autism programs.

“It’s a well-oiled machine. Forty-four years is a long time to do the event, but every year it is so special and exciting,” Schroeder said. “It’s just a great outpouring of community generosity…. We were super-pleased with the $94,000.”

Some of the money will be used to help CVCDA with its operating costs. Schroeder said they will also devote some to expanding a planned natural playground area for the new autism centre.

CVCDA chair Pam Crowe, who was also the telethon coordinator, was generous with compliments for the community and the entertainers who all come together to make the event a success each year, even at a time when so many worthy causes are looking for donations.

“It’s all about kids, and it’s all about delivering services,” she said. “Every year this community comes through for us.”

She thinks part of the reason is that people know the money is staying in the Comox Valley to help children and their families.

“They can walk down the street and see where their money is going,” she said.

The event started just after 12 p.m. with the Canadian Military Wives Choir singing “O, Canada,” followed by their rendition of the Bill Withers’ classic “Lean on Me.”

The show hosts encouraged people to come down for the fun and to win prizes throughout the day, check out new features like “Storytime” inside the story tent, or make a bid on the silent auction of 71 items.

“This is an exciting day, this is an opportunity to make lives of children better,” Courtenay-Comox MLA Ronna-Rae Leonard said at the outset while onstage with Schroeder, who then declared the annual telethon open for its 44th instalment. More than 30 acts were scheduled to provide music, dance and entertainment throughout the day.

Meanwhile, members of community organizations and other volunteers helped by hosting or taking calls for pledges all day.

The CVCDA provides programming and support for children, youth and adults with diverse abilities and their families. Some of the children have developmental delays while others, as the website, says, “just need a little bit of extra support.” These services include everything from autism support to speech-language pathology. 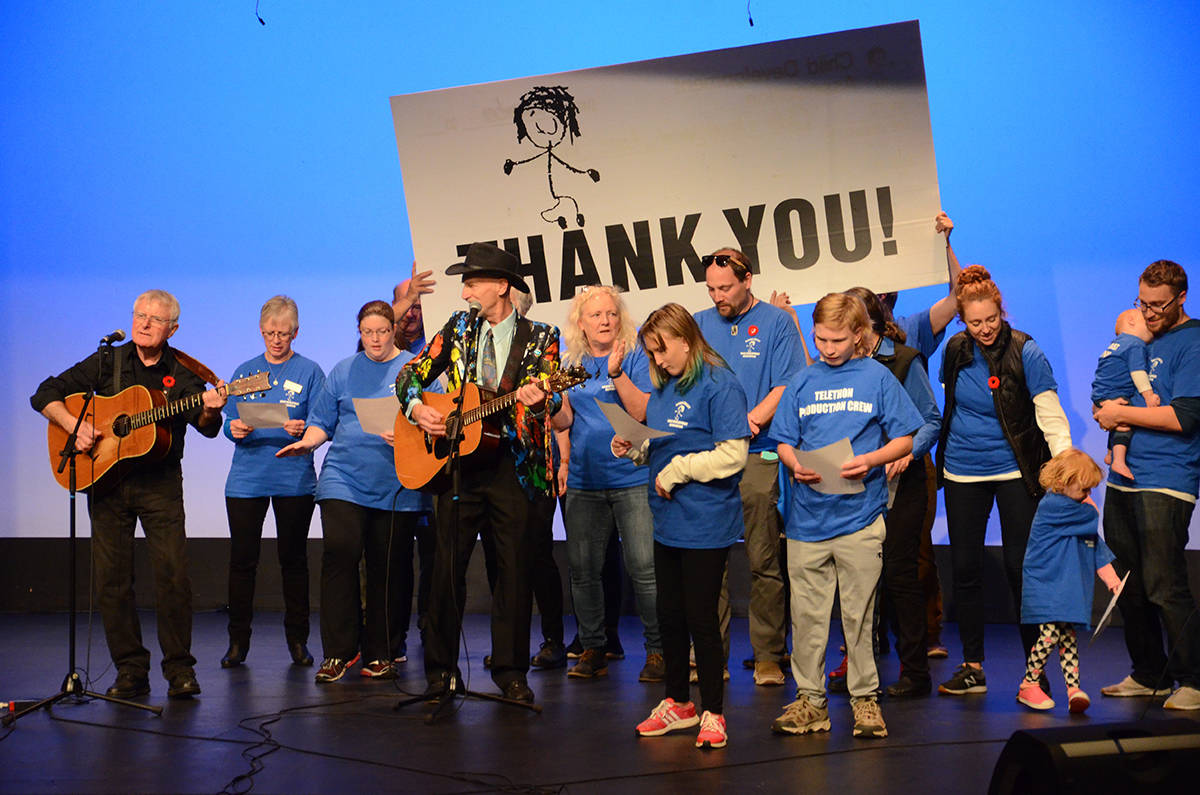 The telethon team sent a big message to the community at the end of the night while singing “Do It for the Kids” after raising more than $94,000 during the day. Photo by Mike Chouinard