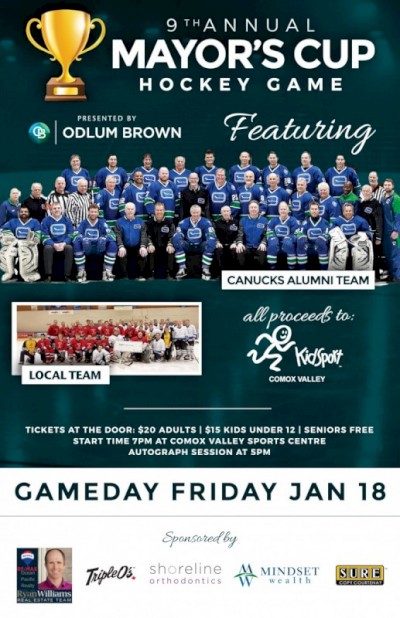 Friday January 18 is the 9th annual Mayor’s Cup – this year, the Mayors’ team will be playing the Canucks Alumni!  The event will be from 7-9pm, with an autograph signing beforehand at 5pm.

Tickets will be available at the door! But to avoid disappointment if the event sells out, tickets are available for pre-purchase at Happy’s Source for Sports (256 6th Street, Courtenay), Courtenay Chevron (600 Ryan Road, Courtenay) and Comox Chevron (701 Anderton Road, Comox) – cash only please.

Thomas Gradin, who led the Vancouver Canucks to the team’s first trip to the Stanley Cup final in 1982, is among the members of the Canucks Alumni who will play in the upcoming Mayors Cup in the Comox Valley.

The Canucks Alumni is comprised of former hockey players, coaches, administrators and a few entertainers. It has about 125 members living in B.C., the core group in the Lower Mainland. Other members live in various parts of North America and Europe. Its purpose is to support the hockey fraternity as well as charities.

Proceeds from the Mayors Cup will benefit Comox Valley KidSport — a non-profit organization that helps children who cannot play sports due to financial barriers.

If you are interested in pre-purchasing tickets, please visit one of the locations above or email KidSport at kidsportcomoxvalley@gmail.com

KidSport is a national not-for-profit organization that provides financial assistance for registration fees and equipment to kids aged 18 and under. Through a confidential application process we provide grants so they can play a season of sport. Nationally, KidSport is comprised of a network of 11 provincial/territorial KidSport chapters and 166 community KidSport chapters. Since its creation in 1993, over 750,000 kids across the country have been given the chance to play sport through KidSport grants and sport introduction programming.

Stay up to date with Bob Wells

Subscribe to the Bob Wells for Mayor campaign mailing list to stay up to date on my platform, public appearances and other important news related to the Courtenay City Council election on October 20th, 2018.