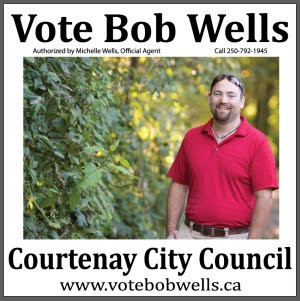 My Tech Guys owner and “Extreme Geek” Bob Wells has thrown his hat into the political ring, announcing he is running for Courtenay City Council.  When asked for comment Bob responded, “I’ve been planning to get back into politics, but the City sueing Maple Pool to evict its residents forced me to act now.  This is a defining moment in our City’s history and action must be taken now to stop the lawsuit so that a real solution can be worked towards in partnership with all stakeholders.”

Upon arriving in Courtenay in 2003, Bob joined the Strathcona Sunrise Rotary Club where he became the Youth Exchange Office in charge of Rotary’s International Youth Exchange programme for the club.  As president in 2010 he commisioned a Vissioning workshop so the club could create a 5 year plan. He also donated $10,000 to the Hospice Society, $5000 to YANA for Jeneece Pl, and $1000 for Rotoplast amongst others.  Bob also Live Streams the Child Development Telethon as well as Federal, Provincial and Municipal candidate debates, allowing a larger audience the opportunity to watch events they are not able to attend.  He worked hard to make sure the 2013 Air Show could happen, providing laptops and technical expertise to get Fibre Optic connections to the runway.

Bob has been recognized as one of BC’s Top 40 under 40 leaders for his professional and volunteer work.  His company My Tech Guys has also won several awards including the Comox Valley Small Business of the Year and BC’s Fastest Growing Company.  “I’m actually most proud of the 6 times we have won local parades.  My focus is to have a very positive, proactive culture in our company and it really shows.”, says Bob.

I am confident my experience, passion and energy makes me the best candidate for Courtenay City Council.  I have a proven record of successful leadership and working towards a better community.  If you agree, please support me and Vote on November 15 or at Advanced Polls / Mail In Ballot.

Bob and his wife Michelle moved to the Courtenay in 2003 looking for a nice place to “retire” and raise their family.  They already visited frequently to go skiing, kayaking and boating, but were were blown away with all the community events like MusicFest, CYMC, Nautical Days and the Filberg Festival.  When Bob and Michelle’s twins were born, they spent 4 months in the Victoria hospital in the Neonatal Intensive Care Unit.  They were amazed by the support they received from YANA as well as the Child Development Society.  “We couldn’t believe how supportive the community was to our family in our time of need.  We could never have known what a perfect place this would be.  Natural beauty for an active lifestyle, a vibrant arts community, and a community that supports all that live here. This is truly the centre of the universe”, says Bob.   Bob has also had professional success winning several business awards for his company My Tech Guys including BC’s Top 40 Under 40 and BC’s Fastest Growing Company.

Bob Wells has won several awards over the years including BC’s Top 40 Under 40, as the only person winning from outside the lower mainland.  “We have been very fortunate that our company has flourished in difficult times.  Our focus on customer service and supporting as many of our local non-profit organizations like CYMC, YANA, Child Development, Hospice and Musicfest has helped us shape the our community in a positive way.”  My Tech Guys also won BC’s Fastest Growing Companiy in 2010.  “I’m most proud of our company culture, which ensures employes are empowered to make decisions and take ownership.  Regardless of our awards, at our weekly meetings we always work hard to see if there is anything we can do better.  And because we vote on what we sell, we avoided Windows Vista and still sell Windows 7 for customers not wanting to jump into Windows 8”.