On March 9th 2014 Bob Wells, owner of My Tech Guys, was honoured by winning the Vancouver Island Top 20 Under 40 Award. Although this was the first year of the awards, it was the 3rd such award Bob has won in the past 12 months giving him a Tri-Fecta Under 40 Top business leaders in BC, the Comox Valley and now Vancouver Island.

Bob was recognized for his outstanding business success for My Tech Guys as well as his career prior to starting the company. The awards also single out people that are also community minded and volunteer in a significant way.

Bob thanked his wife, Michelle Wells, for her support over the years. Without her support and the support of their families it would have been impossible for Bob to achieve what he has so far.

Bob also thanked Rotary International for sending him to South Africa in 1991 when he was 17 as a Youth Ambassador. Bob was extremely interested in politics and wanted to go to be a part of fighting Apartheid, a system of racial segregation enforced by the government that was overturned in 1992. This led to the first democratically elected president of South Africa Nelson Mandela in 1994.

Bob also credits much of his success in the Comox Valley from being part of the Rotary Club of Strathcona Sunrise. When he moved to the Valley in 1993 he contacted the club to volunteer as a host for Youth Exchange Students and was asked to join the club. Although he thought he was too young, he accepted and was amazed at all great work Rotary does in the Valley as well as internationally.

As a direct result of being a member of the Rotary Club, Bob began volunteering for CYMC (The Comox Valley Youth Music Centre), the Comox Valley Chamber of Commerce, YANA, Habitat for Humanity, CV Child Development and many other organizations. Bob has held several board positions including the President of the Rotary Club of Strathcona Sunrise (2010) and CYMC (2005-2007).

Bob’s previous work in education has included teaching at Excel Career College, UVic, Okanagan University College as well as working at the Ministry of Education. Prior to moving to the Comox Valley Bob was in charge of the Internet Department at Shaw Cable creating policies and procedures and training hundreds of staff including call centres, network operation centres, headed, installations, service and inventory. Bob also had the opportunity to work on many TV and radio shows as the “Super Geek” giving advice and opinions on technology.

“It is an extreme honour to receive this award. I was a work-a-holic before moving to the Comox Valley and forced myself to work a 4 day week to make sure I made time for family and volunteering. I can’t thank my wife enough for her support and never ending confidence in my abilities, and the support of organizations like the CV Chamber of Commerce and the mentorship of thousands of Rotarian’s around the world I have been able to meet over the past 23 years. Without my outstanding staff and amazing customers My Tech Guys would not be the success that it is. The fact that we have a great community and an abundance of outdoor activities, it truly makes me feel like we live in the Centre of the Universe.” 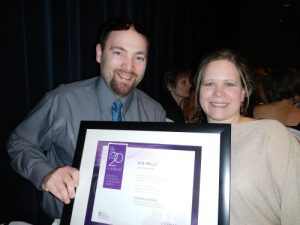 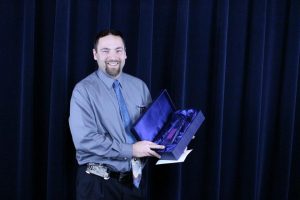 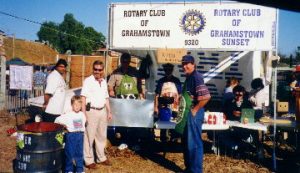 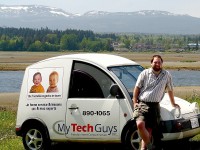